I have a couple of group texts going with different girlfriends. The other day my friend Britney texted us a screenshot of a particularly delightful Facebook Marketplace posting. Now before I go any further, I should say that I have shopped the Facebook Marketplace and other B/S/T (buy/sell/trade) Facebook groups on numerous occasions. There are two especially good ones (Heights and Midtown) in Little Rock. If you’re in the area, look them up and get on the waiting list. And yes, there’s a waiting list.

I think the concept is great. Who actually pays full price for anything these days? But sometimes the things people post for God and everyone on the internets to see is too good, too rich, to believe. So I had an idea. I want to share some of my recent favorite finds, sans all identifying information because we aren’t here to poke fun at people (just their stuff).

Maybe I will make this a regular thing. But for now, enjoy these marketplace postings and marvel at the things people will try to sell on the public stage.

This is a clever form of laziness: attempt to clean out your hoarder’s nest by selling off one entire room of trash at a time. I can’t decide if the “Wow!” Facebook reactions are of “Wow! That’s a hell of a deal!” or of disgust- “You are disrespecting the integrity of this B/S/T group!” I vote disgust. 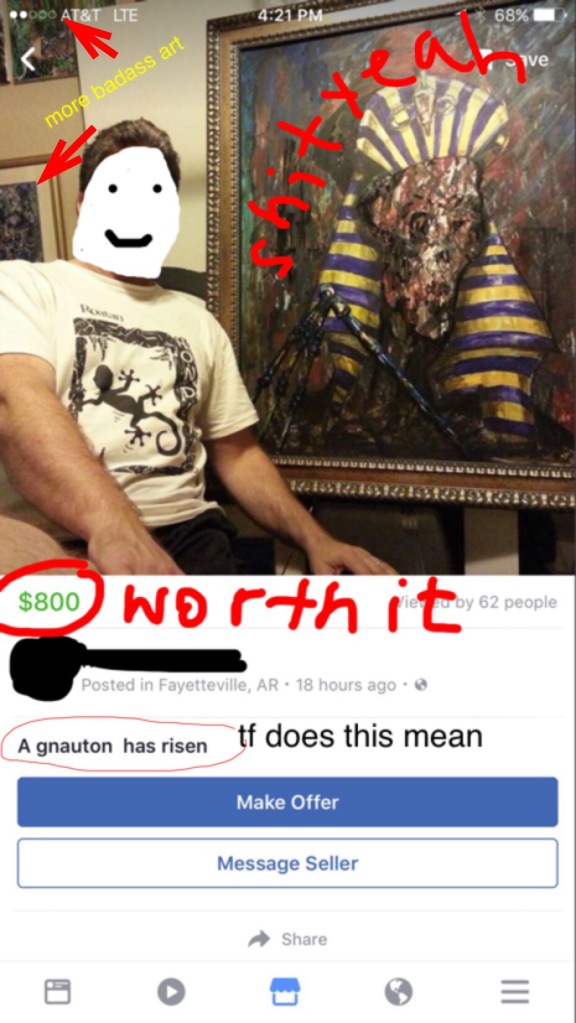 I looked up the word “gnauton” and didn’t find anything. If you know what this means, feel free to reach out to me and let me know. Until then, I will assume that “A gnauton has risen” is this guy’s code for “local badass artist rises up like a Phoenix from oppressive mainstream art” or an equivalent sentiment. I think what I love most about this posting is the dude posing by his piece. In all honesty, I’m not sure I should have removed his face from the picture. This man is proud. Damn proud. Props.

As a mother who sends her kids to daycare, I know the handwringing involved in selecting the perfect, safest, most-wonderful-place-on-earth for your children to go. And for me, unless you have a floating neon feline skull as a daycare emblem, I don’t want to hear from you. Also, the less information you provide me upfront, the better. My kids are already signed up.

I really don’t need to say much about this except its most definitely hand painted and it’s absolutely exquisite. No frame needed is a plus too. 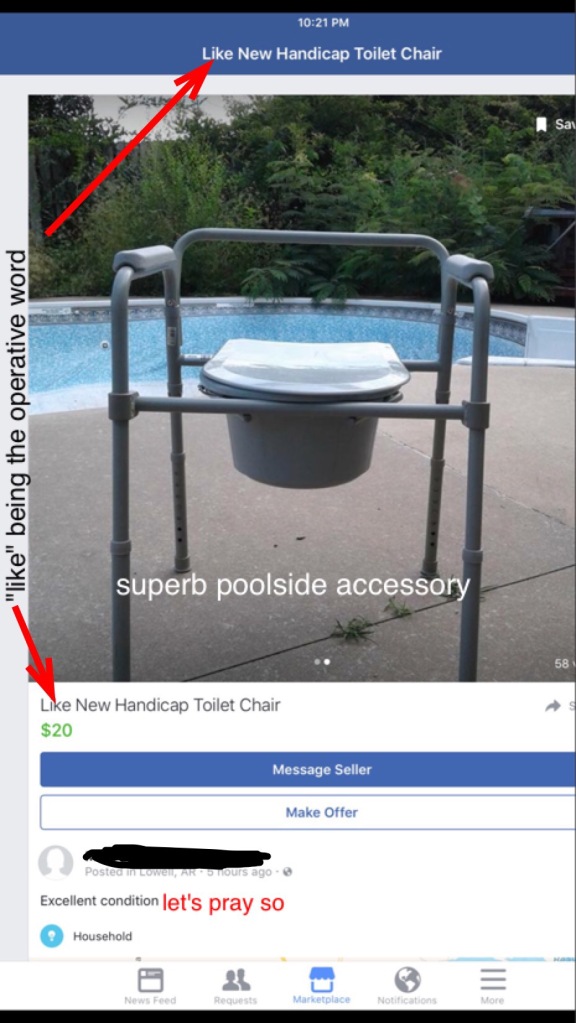 I will never understand people who set their commodes out by the side of the road. Why would I want to display my potty place and why in the holy hell would I ever want to see yours? But now with Facebook Marketplace, you can display it for the world. Civilization thanks you.

As a patron of Branson, MO, I am no stranger to animal themed art and leisure wear. T-shirt with a howling wolf and bald eagle, soaring above babbling brooks and Old Glory? Sure. So when I spotted this item I didn’t bat an eye. Its a large decorative and illuminated vinyl grizzly bear catching his breakfast. Audio included. Pretty standard stuff.

But what did catch my eye was the bottom of the post: 4 likes and 20 comments. And that’s when I found out people actually buy this shit. Also, I know I said I would remove all identifying information from the parties involved, but part of this person’s name is Grizz. Considering their feverish pursuit of this particular item it was too good not to display.

Baby dolls are frequent flyers in the Facebook Marketplace. And without fail they are creepy af. Case in point- this item. Snuggle with my little girl? Are you insane? That thing is 100% demon possessed and looking for a new soul to claim. Hard pass.

I’m going to give you some insight about B/S/T-type shoppers: these people don’t fool around. If you sell a $3 dress EUC and a small stitch is loose on the back bottom hem- you better hide. These people will come back for their $3 and vengeance. To someone who would drive several miles out of their way for a $2 used article of clothing (originally retailed $10), bargain shopping is a blood sport. So when entering the B/S/T arena, display you wares AS THEY ARE; don’t church them up.

Take for example this person, who managed to pawn off a decrepit playhouse. Power wash it, you say? A power washer is going to blow this thing to smithereens. And $200 for this pile of matchsticks? Any B/S/T shopper worth their salt is going to call booshit on that one.